“I’m always in search of ‘different-ness’… show me something different that’s going to make my brain think.”

Our Urban Explorer, the renowned London graffiti artist Darren Cullen from Graffiti Kings, knows London from the inside out, from a lifetime behind the scenes in the forgotten tunnels and streets. As such, we thought it would be fascinating to put together an itinerary of London destinations where our urban explorers at Page8 can see the hottest street art in the city. You might even come across a new mural being painted:

Initially made famous by Banksy when he held a festival there seven years ago, this tunnel underneath Waterloo Station is completely covered in artwork. What’s quite unique is that it is legal to do graffiti here, and you’ll find so many different styles in one place.

Start at Stolen Space Gallery at the south end, which hosts temporary, contemporary underground and urban art exhibitions. As you head north towards the markets, streets on either side will have artwork somewhere. Between Fashion Street and Fournier Street, there’s a parking yard with a lot of graffiti in it, always changing. A few roads further north on the right, take a stroll down Hanbury Street, there’s plenty of art down there, and then if you head back and cross Brick Lane to Hanbury Street on the west side, you can head to Corbet Place where you’ll find D-Face and Banksy’s car.

There’s so much art here, from Boxpark, the pop-up mall made from shipping containers, to the Shoreditch Art Wall on Great Eastern Street. There’s a big wall on Holywell Lane that changes every few months, and the Pure Evil gallery showcases this urban artist’s work alongside other street art. Rivington Street has some big names, including Banksy, Ben Eine, Cranio and Rolla. If you’re short on time, it’s the best street in the area. Redchurch Street has work by Shepard Fairy, Mr Cenze and Aylo. Stik is one of the best-known artists in the area, known for his ‘stik people’. 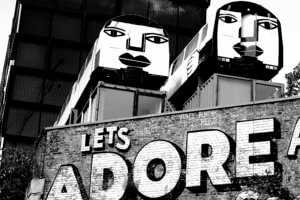 Lots of artists live in warehouses in this industrial area, so there’s so much art, but it’s easy to get lost round here. Wallis Road and Wallis Street are a good start, with the 90 Bar (great joint with street art inside) and some murals. Next, head to Fish Island, down White Post Lane from Hackney Wick Station. There’s art all the way along, down to the river and Crate Brewery. Wander around Bream Street, Dace Road, Smeed Road and Stour Road to find work by Ali Hamish, 616, Pang, Nemo and lots of big names – they all go to Hackney Wick to practice new pieces.

As this area gets redeveloped, a lot of the street art is disappearing so get down there while you can still see it! Head to the Be At One bar on Camden High Street and there’s a little alleyway next door called Miller Street with some big pieces of art down it. Hawley Mews, off Hawley Street has some great artists on the wall there. Hartland Road, at the other end of the Mews, has a stunning Dan Kitchener, a rainy night scene in Tokyo. Stand back and take it in! 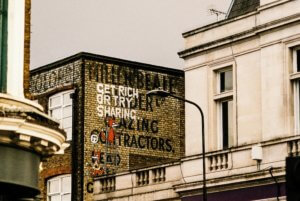 With some of the biggest legal writing spots in the UK, the South Bank has provided a huge canvas for graffiti artists for decades. Underneath the Southbank Centre is the Undercroft that has been at the heart of skateboarding in London for over 40 years and is constantly being covered in new work. Over the years, the Southbank Centre itself has commissioned artists to produce large-scale pieces across the building’s surfaces. Artists have included ROA, Phlegm and Bread Collective. 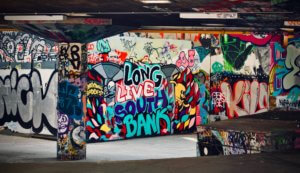 One of the most famous legal spots to paint in the world, where street artists from all over the globe come to showcase their art. The paint on the walls is layered deep, with new pieces constantly added. It’s always quality art, any mediocre work is taken off the walls.

TravellifestyleadventureurbanexplorerexplorearthackneybricklanecamdengraffitistockwellsouthbankundercroftskateparkhackneywickshoreditchstreetartbanksygraffitikingsLondon
Urban Explorer Series: Interview with Vicky Lau
Culinary
Urban Explorer Series: Interview with Darren Cullen
Culture
Page Hotels website places cookies on your device to give you the best user experience.
By using our websites, you agree to the placement of these cookies.AgreePrivacy Statement